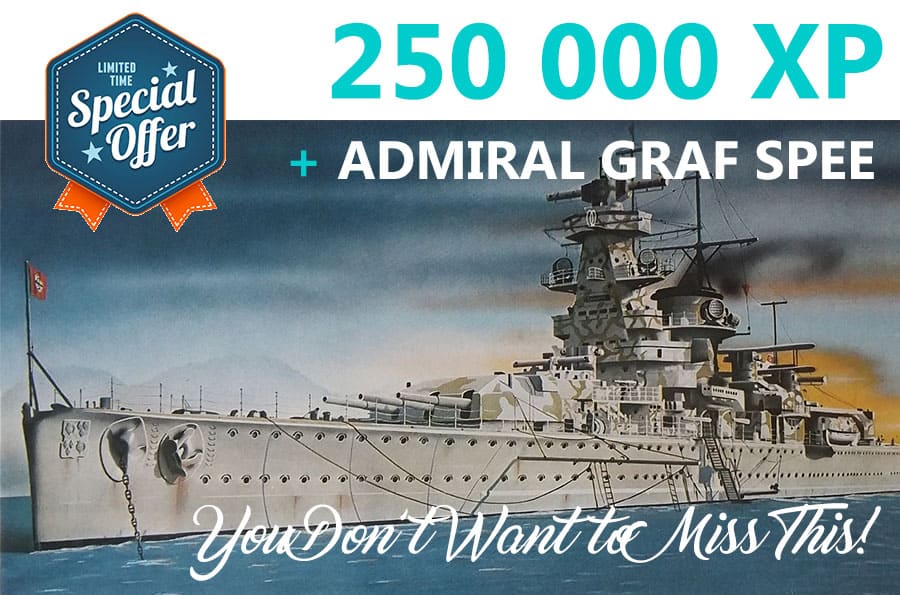 You will pay just for experience points farming.
You will get  your XP, Admiral Graf Spee tier 6 premium german heavy cruiser and all "The Hunt for GRAF SPEE" campaign rewards:

Prerequisites and minimum requirements:
Active premium account
As additional bounus our drivers can do one more additional campaign tasks for you. Just name it in order details form.

Admiral Graf Spee was deployed to the South Atlantic in the weeks before the outbreak of World War II, to be positioned in merchant sea lanes once war was declared. Between September and December 1939, the ship sank nine ships totaling 50,089 gross register tons (GRT), before being confronted by three British cruisers at the Battle of the River Plate on 13 December. Admiral Graf Spee inflicted heavy damage on the British ships, but she too was damaged, and was forced to put into port at Montevideo. Convinced by false reports of superior British naval forces approaching his ship, Hans Langsdorff, the commander of the ship, ordered the vessel to be scuttled. The ship was partially broken up in situ, though part of the ship remains visible above the surface of the water.